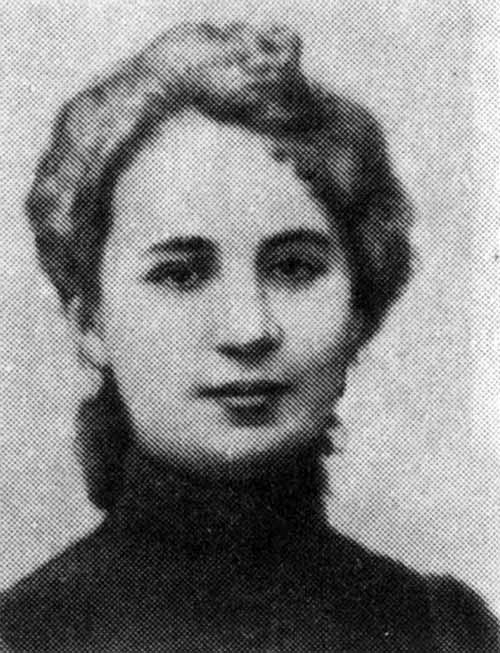 “In appearing with a separate exhibition, I wish to display my artistic development and work throughout the last thirteen years. I fathomed the art of painting myself, step by step, without learning it in any art school (I studied sculpture for three years at the Moscow Institute of Painting, Sculpture, and Architecture and left when I received the small medal).

At the beginning of my development I learned most of all from my French contemporaries. They stimulated my awareness and I realized the great significance and value of the art of my country – and through it the great value of the art of the East. Hitherto I have studied all that the West could give me, but in fact, my country has created everything that derives from the West.

Now I shake the dust from my feet and leave the West, considering its vulgarizing significance trivial and unimportant – my path is toward the source of all arts, the East. The art of my country is incomparably more profound and important than anything that I know in the West (I have true art in mind, not that which is harbored by our established schools and societies). I am opening up the East again, and I am certain that many will follow me along this path.

We have learned much from Western artists, but from where do they draw their inspiration, if not from the East? We have learned the most important thing: not to make stupid imitations and not to seek our individuality, but to create, in the main, works of art and to realize that the source on which the West draws is the East and us. May my example and my words be a good lesson for those who can understand its real meaning.

I am convinced that modern Russian art is developing so rapidly and has reached such heights that within the near future it will be playing a leading role in international life. Contemporary Western ideas (mainly of France; it is not worth talking of the others) can no longer be of any use to us. And the time is not far off when the West will be learning openly from us.

If we examine art from the artistic monuments we have at our disposal without bearing time in mind, then I see it in this order:

The Stone Age and the caveman’s art are the dawn of art. China, India, and Egypt with all their ups and downs in art have, generally speaking, always had a high art and strong artistic traditions. Arts proceeding from this root are nevertheless independent: that of the Aztecs, Negroes, Australian and Asiatic islands – the Sunda (Borneo), Japan, etc. These, generally speaking, represent the rise and flowering of art.

Greece, beginning with the Cretan period (a transitional state), with its archaic character and all its flowering, Italy right up to the age of the Gothic, represent decadence. Gothic is a transitional state. Our age is a flowering of art in a new form – a painterly form. And in this second flowering it is again the East that has played a leading role. At the present time Moscow is the most important center of painting.

I shake off the dust of the West, and I consider all those people ridiculous and backward who still imitate Western models in the hope of becoming pure painters and who fear literariness more than death. Similarly, I find those people ridiculous who advocate individuality and who assume there is some value in their effort even when it is extremely limited. Untalented individuality is as useless as bad imitation, let alone the old-fashionedness of such an argument.

I express my deep gratitude to Western painters for all they have taught me. After carefully modifying everything that could be done along these lines, and after earning the honor of being placed alongside contemporary Western artists in the West itself, I now prefer to investigate a new path.

And the objectives that I am carrying out and that I intend to carry out are the following:

To set myself no confines or limitations in the sense of artistic achievements.

To make continuous use of contemporary achievements and discoveries in art.

To attempt to introduce an enduring legitimacy and a precise definition of what is achieved – for myself and for others.

To fight against the debased and decomposing doctrine of individualism, which is now in a period of agony.

To draw my artistic inspiration from my country and from the East, so close to us.

To put into practice M. F. Larionov’s theory of Rayonism, which I have elaborated (painting based only on painterly laws).

To reduce my individual moments of inspiration to a common, objective, painterly form.

In the age of the flowering of individualism, I destroy this holy of holies and refuge of the hidebound as being inappropriate to our contemporary and future way of life. For art, individual perception can play an auxiliary role – but for mankind, it can play none at all. If I clash with society, this occurs only because the latter fails to understand the basis of art and not because of my individual peculiarities, which nobody is obliged to understand.

To apprehend the world around us in all its brilliance and diversity and to bear in mind both its inner and outer content. To fear in painting neither literature, nor illustration, nor any other bug-bears of contemporaneity; certain modern artists wish to create a painterly interest absent in their work by rejecting them. To endeavor, on the contrary, to express them vividly and positively by painterly means.

I turn away from the West because for me personally it has dried up and because my sympathies lie with the East.

The West has shown me one thing: everything it has is from the East.

I consider of profound interest that which is now called philistine vulgarity, because it is untouched by the art of blockheads – their thoughts are directed exclusively to the heights only because they cannot attain them; and also because philistine vulgarity is predominant nowadays – contemporaneity is characterized by this. But there is no need to fear it; it is quite able to be an object of artistic concern.

Artistic vulgarity is much worse because it is inevitable; it is like the percentage of crime in the world, uniform at all times and in all arts. My last word is a stone thrown at artistic vulgarity – ever aspiring to occupy the place of an achievement of genius.

P.S. My aspiration toward the East is not my last development – I mean only to broaden my outlook; countries that value artistic traditions can help me in this. For me the East means the creation of new forms, an extending and deepening of the problems of color.

This will help me to express contemporaneity – its living beauty – better and more vividly.

I aspire toward nationality and the East, not to narrow the problems of art but, on the contrary, to make it all-embracing and universal.

If I extol the art of my country, then it is because I think that it fully deserves this and should occupy a more honorable place than it has done hitherto.”