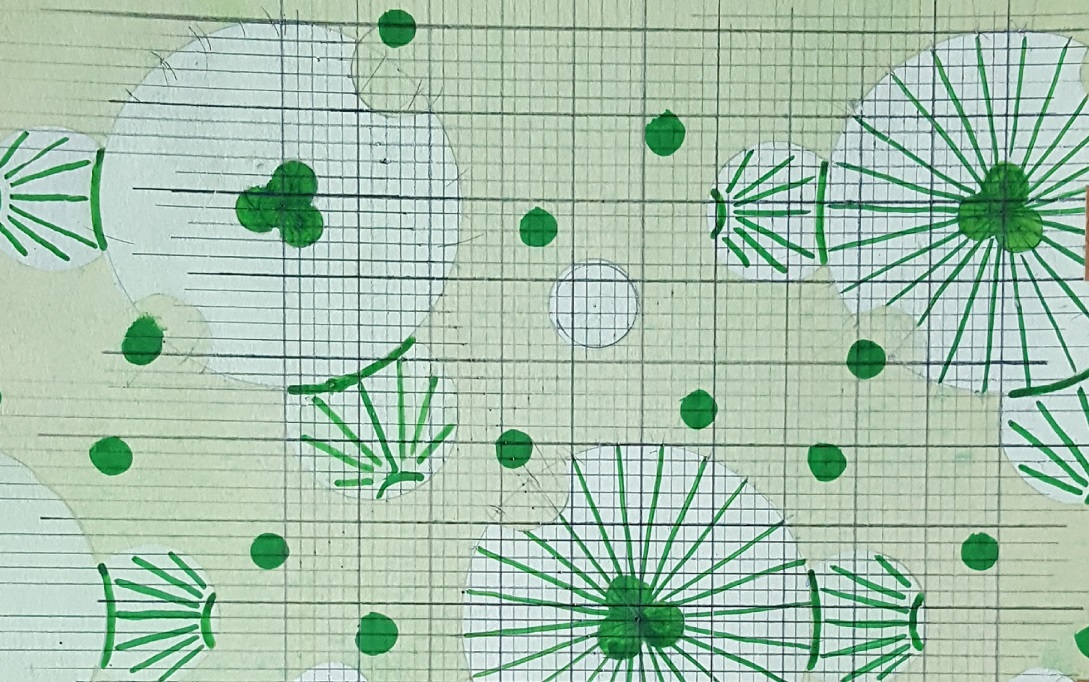 “Now I shake the dust from my feet and leave the West, considering its vulgarizing significance trivial and unimportant – my path is toward the source of all arts, the East.”

This statement, issued as part of Natalia Gontcharova’s Artistic Manifesto of 1913 was a bold one, especially considering that most of Russian culture at the time was very much pointed toward Paris, London and the ‘West’. What might Gontcharova mean here when she refers to the East and Eastern Art?

The elements that define Eastern Art, and the ways it fundamentally differs from Western Art are numerous:


Many Modern artists in Paris from the late 19th century onward were influenced by the arts of the East, notably the Ukiyo-e woodblock prints of Japan. At the Paris Exposition Universelle of 1867, the now-famous names of the great Japanese printmakers were first heard: Hokusai, Hiroshige, Kiiyonaga, Utamaro, Kuniyoshi.

James A.M. Whistler’s 1863-64 painting “Princess from the Land of Porcelain” is a great example of a European artist aping the look of the Japanese woodblock print within its image of a beautifully draped young lady posed delicately in a sumptuous setting. 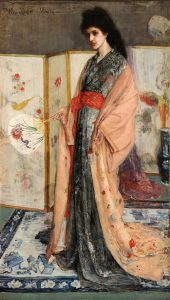 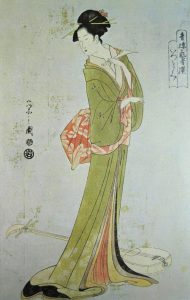 The intention of the original Japanese print was to advertise the services of a courtesan. It was designed as an ephemeral poster to be displayed on the streets of Tokyo. Whistler takes the look of the Ukiyo-e poster and lays it over his oil painting of a young, Western lady. His appreciation of the Eastern form is superficial. His self-identity is Western and so he transmutes the Asian form into a Western pictorial idiom.

The art of Natalia Gontcharova to the contrary is created from an Eastern mindset. She uses modern Western art making methods but paints from an entirely different point of view. The end result is sometimes confusing for the Western viewer. It is not easy to appreciate the Eastern aspect of Gontcharova’s work until you know something of this dichotomy between East and West. 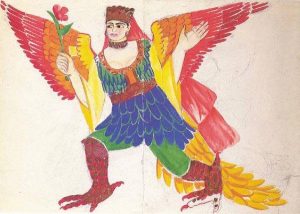 Natalia rarely uses explicit Asian motifs so her work does not look obviously Eastern, yet the more closely a skilled observer regards her work, the more obvious the impact of her Eastern philosophy.

It is challenging to examine art while also suspending your personal points of reference, but that scholarly separation must be achieved in order to appreciate this aspect of Gontcharova’s work. 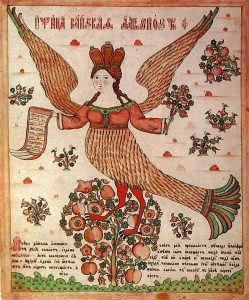 If we take the time and effort to look at Natalia’s work not just through the established and ingrained lenses of Western European Modernism but rather through fresh lenses from different cultures, then new insight can be gained.

Once we consider the art-making practice of other cultures besides that of Western Europe, our eyes are opened to the fact that there are other cultures in the world with amazing creative traditions. Many of those cultures have nothing in common with our own ways of perceiving information intellectually and visually, and so instead offer a fresh perspective all of their own.


For this clean break, like each new day and like Natalia Gontcharova, we can simply look to The East…